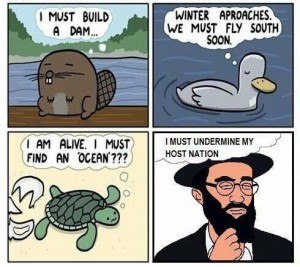 Comparing groups of humans to breeds of dogs is perhaps the laziest analogy in the history of human behavior genetics. It’s what high school kids write me about when they first become interested in the subject. You could start with the fact that dogs have been systematically selected for physical and behavioral characteristics for many thousands of years; humans have not. That is part of what makes the argument so gross, but it isn’t what is most important here.

Hominins are the first and foremost selected animal, domesticated prior to and more thoroughly than dogs. So Turkheimer is wrong on that point. Beyond that his argument is that Cochran is stupid – the kind of argument an elementary school kid makes. He concludes by projecting his own tribe’s behavior onto Cochran:

It is not Carl Zimmer who lets his policy preferences color his view of science. It’s Cochran

Turkheimer puts the bulk of his effort into trying to keep the argument in the weeds, away from who is lying and why, away from the jewing Cochran describes without explictly identifying as such.

I agree with Cochran: if someone found a well-understood genetic mechanism that had a deterministic effect on behavior within a close range, some IQ equivalent of webbed paws, and groups turned out to differ in that mechanism, the race-hereditarians would have what they want. But it hasn’t turned out that way. What a well-intentioned hereditarian ought to be doing is searching for a mechanism of that kind, and some of them are; more power to them. I don’t think they will be successful but I have no fundamental problem with the effort. That’s science.

The more significant agreement between Cochran and Turkheimer is in trying to discuss the long-term one-sided controversy over race – decades of jew-led jew-serving anti-White/anti-“racist” policy preferences, and the recent jew-led jew-serving attempt to spin the potential revelation of their aggressive fraud into something that’s still good for the jews – as if it has nothing to do with jewing. Furthermore, Turkheimer is only now pretending he does not oppose the investigation of racial differences. He’s already on record taking the opposite stand. He anticipates this might be used against him, so he quotes it selectively himself:

Why don’t we accept racial stereotypes as reasonable hypotheses, okay to consider until they have been scientifically proven false? They are offensive precisely because they violate our intuition about the balance between innateness and self-determination of the moral and cultural qualities of human beings. … because it is a matter of ethical principle that individual and cultural accomplishment is not tied to the genes in the same way as the appearance of our hair.

Nevertheless, it is this stereotypical chutzpathy, trying to dictate what everyone else is allowed to think, which created the impression Turkheimer nows calls a “misimpression” and is trying to “correct” by burying it in pilpul:

If groups can differ in those superficial characteristics, why can’t they differ in behaviors as well? This is the very core of the hereditarian argument. My answer is above: the problem is that the relationship between genotype and “nose, lip and eye shapes” on the one hand, and extraversion and IQ and criminality on the other, are fundamentally different.

And that difference has ethical content (implications?). Think for a minute: why do we hold someone responsible for their criminal behavior, but not for the texture of their hair? Hair texture is determined by our genes; we don’t have any choice about it, and groups of people with a certain kind of hair just are the way they are. There is no ethical content to hair texture, no hope that things will be different someday. On the hereditarian view, IQ as a heritable trait is just the same, at maybe a slightly lower level of heritability. That’s the way people are born, there is nothing you can do about it. And because everything is heritable, blunt hereditarianism leads to an obviously false view in which everything, including all of the innumerable behavioral differences among various groups of people– are just a reflection of the way people are born. Hair texture and complex behavior are both heritable, but the causation that underlies the heritability of hair texture is not like the heritability of behaviour, for which the human central nervous system, the greatest engine of anti-determinism ever designed by evolution, is interposed between genotype and phenotype.

Turkheimer makes a bogus distinction between genetically simple and complex racial differences, dressing up as “ethics” a sciency-sounding false dichotomy reflecting his own policy preferences. On the one side he puts visible racial physical traits, which are harder to deny, and which he now proclaims do not hurt his feels. On the other side he puts racial mental traits, the mere thought of which very much offends the stereotypical jew’s screechy bloody victim commissar mentality, and discussion of which Turkheimer and his tribe more generally make no bones about seeking to forbid because they are jews.

Whatever their genetic complexity, mental differences are more crucial to social structure, thereby survival, and are for that reason more deserving of scrutiny. As to Turkheimer’s silly thought experiments… Why shouldn’t one collective hold another responsible for their behavior? Why shouldn’t any collective distinguish itself from others in any way they see fit – simple, complex, physical, or mental? Hominin groups have always done so, still do so, and always will. Indeed, biologists understand discrimination as part and parcel of speciation, a facet of evolution, characteristic of all life.

More to the point, jews do it, and have no peer in this regard. They self-identify both genetically and culturally and shamelessly collectively criminalize their enemies – as “racists”, “White supremacists”, “holocaust deniers”, “anti-semites” – for merely expressing thoughts one or more jews see as threatening to themselves. This is the essence of what Turkheimer previously argued, the basis of the “ethical principle” argument he now omits:

Why Race Science is Objectionable

If I may address my fellow Jews for a moment, consider this. How would you feel about a line of research into the question of whether Jews have a genetic tendency to be more concerned with money than other groups? Nothing anti-semitic, mind you, just a rational investigation of the scientific evidence. It wouldn’t be difficult to measure interest in money and materialism, and it wouldn’t surprise me if as an empirical matter Jews scored a little higher on the resulting test than other groups. As a behavioral geneticist I can assure you without reservation that the trait would be heritable, and, if anyone bothered to take the time to find out, specific genes would have small associations with it. Of course, this research program has already been carried out, at least to the extent the relevant technology was available in 1939.

He could have said “muh six million”, but “1939” gets the idea across well enough.

More recently Turkheimer was perfectly pleased to cite tribemate Cofnas’ positive generalizations about jew mentality – his just-so “default hypothesis” that jews are blameless because they’re smarter and live in cities and have forever screeched as if they have being victimized by the many hosts they’ve parasitized and killed.

What “offends” jews is simply any hint of non-jews doing anything that might obstruct their jewing. They sometimes wrap their special pleading in more broad-minded rhetoric, but at root the ethical principle is whatever’s best for jews. The prevailing anti-White/anti-“racist” narrative and the ongoing phony debate around race and race-related science has everything to do with jews and their jewing. Cochran and Turkheimer both know it. Cochran won’t say it directly. Turkheimer already has.