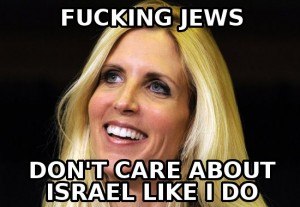 While watching the republican debate on Wednesday night pundit Ann Coulter let her kikeservative act slip when she twitted:

Cruz, Huckabee Rubio all mentioned ISRAEL in their response to: “What will AMERICA look like after you are president.”

How many f—ing Jews do these people think there are in the United States?

The response from incensed jews was swift, vehement, and continues to reverberate.

As Coulter’s old friend Joe Sobran once pointed out, “A hypocritical etiquette forces us to pretend that the jews are powerless victims; and if you don’t respect their victimhood, they’ll destroy you.” Time will tell whether the fucking jews actually destroy Coulter. In the meantime it is easy to make several other points.

That jews are able to so self-righteously swarm like this is a measure of their power – which would go without saying if not for the furtive and illegitimate nature of jew rule. Sobran was destroyed even before he spilled the beans on the jewed reality which confronts every jewsmedia pundit and would-be political “leader”. To work under jew rule one must understand not only that jews rule, but that you must not ever speak ill of this fact. Even praise makes some jews squirm.

Political/media jew-swarmings are a regular occurrence. Other recent examples include The Jew Republic layoffs, Tom “1% kristallnacht” Perkins, Chuck “I’m not an Israeli senator” Hagel, and Sarah “blood libel” Palin. And it’s not just full-time professional jews who swarm, a number of ambiguous jews ditch their disguise to fly to their tribe’s defense, and they fly right across the “left”/”right” divide the goyim regard as sacrosanct.

As Sobran noted, the dynamic of a jew-swarm is two-pronged. The multitude of jews who reflexively spring forth, either as individuals or as official mouthpieces for larger organs, all express a similar message in a similar way – screeching for someone’s head while whining that jews are the real victims.

It is no coincidence that the someone the jews swarm is always more jew-lover than hater. Coulter’s slip was to connect “f—ing” and “jews”, nullifying all her prior and subsequent pro-jew/pro-Israel groveling as far as jews are concerned. More often the trigger for the jew-swarm isn’t so clear-cut, and their target rushes even more eagerly to beg forgiveness. Even in Coulter’s case it’s plain that the hate-filled boogeywoman some of the more hysterical jews imagine is a mere projection of their own fathomless loxism.