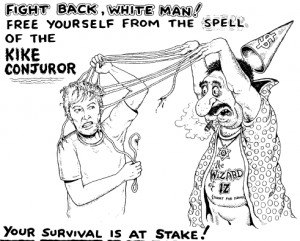 Elaborating on a brief exchange on Twitter concerning terminology, logic, and identity.

A_Linder on Twitter: “Whites won’t even divide up verbally, but persist in using language of the conqueror. “Antisemtism” & “racism” = #antiwhite clown concepts.”

Sigmund Freud and pseudo-scientific Freudianism is the best known example of this characteristically jewish psychological warfare – the identification of fear as not just irrational but wrong, psychopathological, baseless.

The seminal work of the Frankfurt school, the source of what is referred to as cultural marxism, is The Authoritarian Personality:

Some observers have criticized what they saw as a strongly politicized agenda to The Authoritarian Personality. Social critic Christopher Lasch[26] argued that by equating mental health with left-wing politics and associating right-wing politics with an invented “authoritarian” pathology, the book’s goal was to eliminate antisemitism by “subjecting the American people to what amounted to collective psychotherapy—by treating them as inmates of an insane asylum.” Similarly, Slovenian philosopher Slavoj Zizek wrote, “It is precisely the kind of group loyalty, respect for tradition, and consciousness of differences central to Jewish identity, however, that Horkheimer and Adorno described as mental illness in Gentiles. These writers adopted what eventually became a favorite Soviet tactic against dissidents: anyone whose political views differed from theirs was insane.

Richard Hofstader pushed a similar agenda in 1964 with The Paranoid Style in American Politics.

A_Linder on Twitter: “@TanstaaflAoT the jew’s verbal strategy is forced false dilemma, which is a logical fallacy. works only if you control mass media.”

A dilemma is any problem with two potential solutions. It’s more than just a fork in the road. A dilemma has negative connotations, captured in common expressions such as “caught between a rock and a hard place” and “stuck on the horns of a dilemma”. “Choosing between the lesser of two evils” captures the essence of the US selection/election process over the past several decades.

A false dilemma is a logical fallacy that leverages a strong tendency toward binary thinking. “My way or the highway” and “noose or loose” are examples of this tactic. Binary thinking is baked into Aristotlian logic, the premise being that any statement must either be true or false, with nothing in between – the law of the excluded middle.

I’ve often encountered a false dilemma when arguing against the suicide meme. Apologists who describe what’s happening as White “suicide” are implicitly assigning jews 0% responsibility, and when challenged they pretend the exact opposite, that jews are 100% responsible, is the only other possibility. Neither extreme fits the asymmetric, parasitic nature of the relationship and the genocidal effect the jewish agenda is having on Whites.

A_Linder on Twitter: “@TanstaaflAoT all their terms amount to: you’re either with us or agin us. and if you’re against us, you’re evil and should be suppressed”

Tan Staafl on Twitter: “@A_Linder_5 they fear being seen as stupid/crazy/evil by their enemies, fear to even acknowledge that the enemy is an enemy”

The failing of our most intelligent, our would-be/could-be elite, is to clearly distinguish between peers and enemies, between Us and Them. To make a clear distinction is to expose oneself to ridicule and attack.

Tan Staafl on Twitter: “@A_Linder_5 which is why jews psychopathologize/demonize White us/them-recognition most of all – “put down the gun Whitey, do it now””

Terms like “racist” and “anti-semite” are terms of abuse, used to identify and intimidate enemies. They are “buzz terms”, packed with a pejorative payload, weaponized by repetition by supposed authorities, experts in academia and media. The mere recognition that such terms are used by enemies and represent an attack deprives them of their psychological punch and inspires a healthy response instead.

A_Linder on Twitter: “@TanstaaflAoT it’s sickly funny that the only verbal recognition of jew-commies’ mass murder of 100m last century is: political correctness”

Political correctness is the only term (or one of a few) which represents some form of pushback against the jewish agenda and jew rule. Joe Sobran suggested that it would be more appropriate to call it semitic correctness. “PC” is just a “PC” euphemism for SC.

Sobran also noted that “anti-semite” used to be someone who hates the jews, now it’s someone the jews hate. It hasn’t actually changed, both meanings co-exist. Whites almost always mistake it for the former, whereas jews have almost always used it to mean the latter. Before “anti-semite” was popularized in the 1870s the word jews used to identify their enemies was “Amalek”. Since the 1930s “Nazi” has been used for the same purpose.

Excellent point. Charlie Hebdo is a recent illustration. Jews define “hate”, which is criminalized, but also “humor”/”satire”, which is given a pass. Semitically correct “humor”/”satire” can be magically transformed into “hate” by simply swapping the target.

There is a true dilemma facing Whites which jews take great pains to misrepresent as a false dilemma. Are jews White, or not? Jews clearly want Whites to see them as “white”, as allies, as Us, and to see anyone who argues otherwise as a stupid/crazy/evil “racist”, “anti-semite”, “hater”, as the enemy, as Them. For the most part they succeed. Yet jews also clearly see and speak about themselves as distinct from and at odds with Whites. Jew regard Whites not only as an Other, but as their bugbear, their eternal mortal enemy. The tragedy is that Whites generally do not recognize this enemy and their hostility, much less reciprocate.

30 thoughts on “Dilemmas False and True”