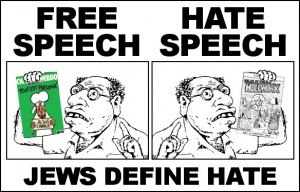 Some observations on the assassination of Charlie Hebdo “satirists” in France last week – specifically how jews have pushed their “free speech, not hate speech, jews define hate” meme.

There is a distinct contrast between the jewsmedia response to the Hebdo attack, Anders Breivik’s attack in Norway in 2011, and their initial reaction to Mohammed Merah’s shootings in Toulouse in 2012.

Hebdo was anti-nationalist. In 1996 Cavanna, Val and Charb (three pillars of Charlie Hebdo) organized a public petition to ban Front Nationale and personally delivered the signatures they collected to the French government.

This animus is in step with The Demonization of Marine Le Pen by the broader jewsmedia.

Hebdo was also anti-islam/anti-muslim. This is what the mainstream jewsmedia found most controversial about it. It does not fit the liberal, leftist or cultural marxist mindset. It is neo-con. Like The Jew Republic under Peretz, but in crude cartoon form.

The controversy reflects a division among jews on whether the islamization of dar al goyim is good for the jews. Outside Israel the clearest ideological distinction between so-called “liberal” and “conservative” jews is where they stand on this issue.

Heebdo illustrates and defines the term, and also links and comments on some prominent examples.

Shyster Sheldon Nahmod is a professor who describes himself as a “well-known expert on constitutional law, civil rights and the law of Section 1983” (which was “enacted as part of the Ku Klux Klan Act of 1871” and “was originally designed to combat post-Civil War racial violence in the Southern states”).

One of the most controversial free speech issues involves hate speech, including but not limited to the anti-Semitic kind. Hate speech and anti-Semitism are major concerns in Europe and the Middle East and remain a nagging concern in the US as well. Hate speech can be defined as speech directed at a historically oppressed religious or racial minority with the intent to insult and demean. Hate speech undermines social attitudes and beliefs, it isolates its targets and it tends to silence them because they are often stunned and unable to respond. Hate speech also traumatizes (think of the effect it had on survivors and other Jews when the Nazis threatened to march in Skokie). We all know some of the hateful slurs that are too often directed against Jews, blacks, Latinos and Italians in this country.

This captures the essence of what you find when you search for “free speech” “hate speech” – lots of jews explaining how “free speech” is not “hate speech”, with jews literally defining “hate”. The decisive factor is identity and intent, who/whom, not words. The key phrase is “historically oppressed religious or racial minority”, the generalized-jew template, how jews describe themselves without using the word jew. It’s part and parcel of the broader jewish narrative.

As I indicated in Christmas 2014, jew worship is openly promoted at the highest levels of government. Charlie Hebdo has been criticized for blasphemy against the dieties of muslims and Christians, but for jews the mere caricature of a generic jew is regarded as blasphemous.

One of the examples the New York Times attached to Proud to Offend, Charlie Hebdo Carries Torch of Political Provocation was a Hebdo cover depicting the Le Pen father and daughter in a concentration camp tower, laughing, with the “new reactionary” jew Eric Zemmour sitting between them looking sour. It is included in the article only as an example of something regarded as offensive and provocative to jews, because it toys with the most holy iconography of jew-worship.

7 thoughts on “Charlie Hebdo and What Heebs Do”