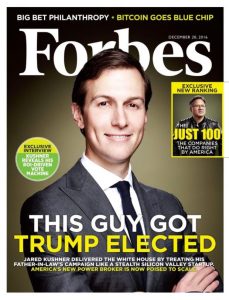 Two years into his administration and President Kushner is once again in the news, a little.

Trump ordered his chief of staff at the time John Kelly to grant Kushner security clearance despite warnings from intelligence officials and White House lawyers, the New York Times reported on Thursday.

According to NBC News, two White House security specialists rejected last month Kushner’s application for a top-secret clearance after a FBI background check raised concerns about potential foreign influence on him, but they were overruled by their supervisor, according to two sources familiar with the matter.

No One Has More Influence on Trump Than Jared Kushner, Ex-NJ Governor Claims:

During an extensive interview with National Public Radio (NPR), Chris Christie, who wrote a memoir entitled “Let Me Finish: Trump, the Kushners, Bannon, New Jersey, and the Power of In-Your-Face Politics”, weighed in on reports that Ivanka Trump’s beloved husband Jared Kushner is de facto operating as White House chief of staff.

“I don’t know if it’s true. But let me say this: There is simply no one more influential in the White House on the president than Jared Kushner. He’s not the only person who he listens to, but I don’t think anyone as more influence than Jared has”, he said.

An October 2017 article in a similar vein, which I mentioned in the comments of President Jew, had the headline Trump Fired Tillerson To Protect Jared Kushner, noting:

By dismissing Tillerson, Trump has demonstrated that “blood is thicker than water” and that he will protect his family at great political cost, even if Kushner continues to generate negative media coverage.

Kushner is the embodiment of foreign influence in the White House. Negative jew influence, driving an agenda completely divorced from what Trump told his thirsty supporters they’d be getting. It’s a big, controversial story, and understandably it is taking time for the jewsmedia to settle on a way to jewsplain it. So far they’ve mostly just ignored Kushner, compensating by loudly and quite consciously shifting attention and blame to Russia instead. Likewise, and for the same reason, they’ve been screeching continuously about WHITE supremacism and WHITE nationalism, as jew-first governments across the West are literally making it illegal to oppose jewing.

I’m glad I took the time to write at least a little about the White-washing of Trump, and the petty intrigues which so characterize his 6000000% jew-first administration. At this point there’s not much more that needs to be said about the kikeservative-in-chief’s latest ever more jewy antics than, what’s President Kushner up to now?