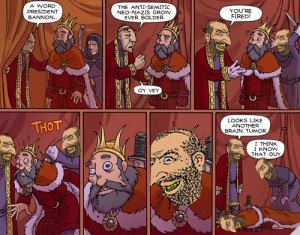 The big news last week was Trump’s abrupt decision to bomb Assad. Around that story swirled rumors of an internal conflict between factions led by Jared Kushner and Steve Bannon, a conflict the Bannon faction has evidently lost.

Most jewsmedia reports described the Kushner/Bannon conflict in anodyne code, typically describing the opposing sides as globalists and nationalists. What’s notable about the following three accounts is how they explicitly describe the jew versus White nature of the conflict, making plain a key aspect of the story that is otherwise buried between the lines in the many more mundane accounts. Moreover, the jews writing these more explicit accounts clearly see the Kushner/Bannon conflict as part of a much larger and ongoing conflict.

Josh Marshall got out in front early on with Inside the Emerging Trumpian Alt-Right Snuff Novel, trying to jewsplain how the anti-jew reaction he was anticipating had actually somehow started it all:

But can we miss that the man who gave coherence and verve to Trump’s campaign against the ‘globalists’ and unrooted cosmopolitan elites is about to be booted by the President’s Jewish tycoon son-in-law and a group of bankers (yes, Jewish bankers) from Goldman Sachs?

All on his own he drew around himself that coterie of “alt-right” white nationalists and neo-Nazis who will likely be his greatest and most lethal contribution to the American political scene. But it was only with Bannon’s arrival that Trump took on the much more coherent and consistent language of Europe-derived rightist nationalism, anti-“globalism” and the thinly covert language of anti-Semitism.

It was pure Bannon, remember, who was behind the speech that became this notorious anti-Semitic closing ad, released on November 5th, 2016.

And yet here we are and let’s not shy away from it. All accounts suggest that Bannon has fallen from grace and will soon be fired by the President. His ouster comes as the loser in a battle with a group of Jewish Goldman Sachs (Cohn, Mnuchin) bankers and the tall, dapper and yet nebbishy Jewish legacy real estate tycoon Jared Kushner. (I’m Jewish. I can say all of this.) It all reads like the kind of alt-right morality play one of Bannon’s deplorables might have written in some grand alt-right dystopic novel. Even the non-Jews are veritable auslanders: A key new player is Dina Powell (born Dina Habib), an Egyptian immigrant (albeit a Copt) who was herself a banker at Goldman Sachs in addition to being a Republican policy insider.

Nor is any of this lost on the Bannonites. We keep hearing that in the harum-scarum of the Trump White House the crowd around Kushner is referred to as the “New York Democrats” or various similar formulations. As an older Jewish friend (who reminds me he’s been asked his whole life whether he’s from New York even though he’s from a different part of the country and has never lived in the city) told me yesterday, this language is not accidental. It’s a reference to their being Jews.

Trump connected to his base not through lifestyle but through the experience of disrespect, grievance and the desire for revenge. He ran a campaign which more and more literally and explicitly demonized (especially under Bannon’s late guidance) the ‘globalist’ machinations of Goldman Sachs. Yet, increasingly, he has built an administration run by Goldman Sachs bankers. Of course, it’s Goldman Sachs bankers and Jared Kushner and protectionist ‘economic nationalist’ xenophobes and racists. It’s an interesting combination. They’ve even imported period piece Eastern European racist nationalists to be part of the fun – see, Sebastian Gorka.

But let’s stipulate now that if the ‘alt-right’ wanted to write a betrayal narrative that touched all the ideological erogenous zones on that fetid body of thought they could scarcely have come up with material more charged, melodramatic and grand.

Of course, jews like Marshall screeched that Trump’s campaign video was “packed with anti-Semitic dog whistles, anti-Semitic tropes and anti-Semitic vocabulary” exactly because they perceive international finance and Goldman Sachs in particular as a big fat example of jewing. Rather than even try to deny such conspicuous jewing, jews instead compound it, and in a characteristically jewy way, by blithely psychopathologizing and demonizing any non-jew who dares to notice.

As usual for dog whistling, Trump’s campaign rhetoric has proven entirely disingenuous. Before his inauguration, still promising to “drain the swamp”, Trump was instead swamping his administration with jews, Goldman Sachs alumni, and jew Goldman Sachs alumni.

The ADL’s account of the Kushner/Bannon clash, Explosive Growth of Hateful Memes and Anti-Semitic Conspiracy Theories Against Jared Kushner, couching it as a reality-inverting White conspiracy against jews:

This campaign of anti-Semitism has been driven by white supremacists and anti-Semites and has all the hallmarks of classic Jewish conspiracy theories. The narratives include accusations that Jews in the Trump Administration are trying to start a war to advance the interests of Israel. They contend that Trump has abandoned his “America First” policy, which the alt right supported, because he is being manipulated by Kushner and other Jewish advisors.

The anti-Semitic social media campaign, which features hashtags on Twitter such as #firekushner, #kushneratwar, #kushnerswar, appears to have begun on April 5 with a few tweets describing the administration’s actions as a betrayal alongside the #firekushner hashtag.

A third account from Brian Beutler, senior editor at Jew Republic, cites and synthesizes these other two accounts to produce the jewiest take of all. The main point of Trump Would Fail Even Worse With Kushner’s Centrism is that Trump is a tool not of the jews but of his White supporters:

Bannon may be deluded about many things, but one thing he does not misapprehend is the extent to which the white ethnonationalist politics he and his boss practice have no crossover appeal.

Trump can’t un-run the campaign he just ran. Politicians often make too much of poisoned wells to rationalize counterproductive obstruction, but poison was the quintessence of Trump’s appeal. Even the popular aspects of his populism were cloaked in the language of revenge—of empowering his people at the expense of political aliens, like immigrants and minorities, who had overtaken them. There is no undoing the impression, widespread among Trump’s foes, that anything he supports must be regressive.

Which is just to say, Kushner wants Trump to chart a new course that leads to a substantive dead end for at least another 19 months. Bannon’s path, at least, preserves the hope of keeping his base consolidated through the legislative ebb. He can deregulate, scapegoat, and unburden law enforcement to turn his Herrenvolk fantasy into reality—all while keeping congressional investigators at bay.

There’s no real logical rebuttal to this, except to point to three months of chaos and humiliation as indicative of the futility of continuing to do things Bannon’s way.

Just as jews loudly screeching “anti-semitism” is a sure sign of jew malfeasance, the consistent reflexive visceral jew hostility toward Whites is a sure sign jews aren’t White.

Many accounts make a similar attempt to attribute Bannon’s downfall and Kushner’s rise to the thwarted travel bans and failed attempt to replace Obamacare. The logical rebuttal is to point out that organized jewry was calling for war on Syria years before Trump, Kushner, or Bannon were in the White House. Likewise, jew knives were out for Bannon months before any internal conflict or legislative failure could be used as a pretext. Beside that, the travel bans were just as much Stephen Miller’s brainchild and healthcare was Gary Cohn’s.

Needless to say the jewsmedia will never give Kushner, Miller, Cohn, Mnuchin, or any other member of the tribe the Alinsky treatment. Though McCarthy and Nixon still loom like Trump-Hitler phantasms in the minds of jews, their jew aides, Roy Cohn and Henry Kissinger, are either ignored or celebrated. The same is and will continue to be the rule for Trump’s jews.

My take on the Kushner/Bannon conflict is that it reflects a clash between the two main jewhadi factions backing Trump. The faster, please open-borders perpetual worldwide “war on terror” neoconish faction is prevailing over the upstart “war on ISLAMIC terror” counter-jihadi kids and their economic “JUDEO-Christian” non-nationalism. Wall and ban rhetoric may have helped Trump get elected, and he may return to it in 2020, but in the meantime he doesn’t need to pretend to believe it.

The two factions which have most vehemently opposed Trump – the left-posing jews driven more by an all-consuming hatred for Whites and the right-posing #NeverTrump neocons driven more by an all-consuming love for the jew state – view the phoney nationalism of Trump’s counter-jihad faction as worse than unnecessary. Letting Whites think they can criticize or exclude anyone but other Whites is dangerous for the jews. They have their jew state and feel no pressing need to concede anything like it to anyone, especially not obsequious kikeservatives. As the three takes above indicate, the jews who oppose Trump see Whites as the primary enemy, not the mooselimbs and certainly not bankers.

It was evident from the very beginning of Trump’s campaign that, like most politicians, he understood very well what Whites are desperate to hear. Unlike most politicians Trump was more willing to say those things, even though it meant violating jew taboos. But it was also evident that Trump never intended to do anything “racist”, i.e. anything that might truly benefit Whites, much less check jew power. The fact is that neither Trump nor Bannon nor Gorka nor anyone else in the current administration has ever said anything positive about Whites as Whites or anything negative about jews as jews. Quite the opposite. They all basically agree with their jew tormentors that “nazis” are the real problem.

When the anti-White jewsmedia screeches that Trump is somehow promoting “White supremacism” or “anti-semitism” what they’re really doing is “the reverse”. They’re white-washing jews and their jewing. And in that process they’re making it clear who is waging war upon whom.

32 thoughts on “Intrigue in Trump’s Palace”