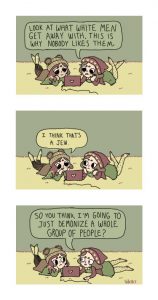 At first glance, the Epstein saga looks like another example of how justice is not, in fact, blind — of how it tilts toward the powerful at the expense of the vulnerable. Mr. Epstein, who has claimed to have made his fortune managing other rich people’s money, was not just wealthy; he was politically and socially wired, hobnobbing with such boldfaced names as Prince Andrew, Bill Clinton and Donald Trump.

It betrays a system in which the rich and well-connected can bully public officials into quiescence — or into pursuing a deal so favorable to the accused that it runs afoul of the law.

I think I described what’s going on pretty well in The Tautology of Jewing. The system is criminal jewing, a system so successful that it defines whatever vexes jews as criminal.

Nobody really gets bullied for criticizing “the rich and well-connected”. The system tilts toward the jews at the expense of anyone and everyone else, no matter how wealthy or supposedly powerful. Lame attempts to describe it the other way around demonstrate this tilt. In 2014 Tom Perkins provided one particularly stark but short-lived example. Since 2015 President Kushner has provided regular reminders about who does the kicking and who does the licking.

Who protected Epstein? The questions shouldn’t stop there! Who is still protecting him? Who helped enrich him in the first place? Who boosted him up, got him “politically and socially wired”? The answers aren’t difficult to find.

The Times editors link a notorious 2002 Jew York Mag article, Jeffrey Epstein: International Moneyman of Mystery, which describes the jewy network around Epstein. Of course, this was before Epstein’s wrong-doing was exposed and the jewsmedia began shifting blame to “the rich and well-connected”.

A few of the handful of current friends who have known him since the early 1980s recall that he used to tell them he was a “bounty hunter,” recovering lost or stolen money for the government or for very rich people. He has a license to carry a firearm. For the last 15 years, he’s been running his business, J. Epstein & Co.

Since Leslie Wexner appeared in his life—Epstein has said this was in 1986; others say it was in 1989, at the earliest—he has gradually, in a way that has not generally made headlines, come to be accepted by the Establishment. He’s a member of various commissions and councils: he is on the Trilateral Commission, the Council on Foreign Relations, the New York Academy of Sciences, and the Institute of International Education.

His current fan club extends to [Bear Stearns C.E.O. James] Cayne, Henry Rosovsky, the former dean of Harvard’s Faculty of Arts and Sciences, and Larry Summers, Harvard’s current president. Harvard law professor Alan Dershowitz says, “I’m on my 20th book…. The only person outside of my immediate family that I send drafts to is Jeffrey.” Real-estate developer and philanthropist Marshall Rose, who has worked with Epstein on projects in New Albany, Ohio, for Wexner, says, “He digests and decodes the information very rapidly, which is to me terrific because we have shorter meetings.”

Just last April Nathan Oseroff-Spicer dropped a series of twits jewsplaining how “Lawrence Krauss, Steven Pinker and Jeffrey Epstein have an odd relationship that provides insight into the relationship between the institutions of science, the movement of capital, the profit motive and science funding”. As with the longer mainstream jewsmedia efforts, ostensibly to provide insight, the attempt is to explain the jewing without mentioning that it is jewing, substituting less sensible motives instead.

What makes this unfolding story all the more remarkable is that sniffing out and screeching about tribalism is very trendy in the current totally jewed political discourse. Pinker expressed his concerns a few months ago by citing an op-ed decrying tribalism written by a tribemate at the Jew York Times.

All this sniffing and screeching isn’t about rooting out tribalism as a general principle. It’s just jew tribalism, racial animus aimed at Whites by jews. The same can be said for the jewsmedia’s constant disparaging use of the terms White privilege, White nationalism, and White supremacy. The slur is in the word White, not whatever other words they attach to it.

Some “liberals” may try to White-wash the jewing around Epstein, framing it as an example of “white” privilege or supremacy, but it’s unlikely to become the dominant jewsmedia take. As with the Fed, any such effort would only call attention to a tribalism which is more jewy than “white”.

Likewise for crying “anti-semitism”. Dershowitz tried that in the early 1990s, helpfully highlighting the jewy essence of a massive wave of financial fraud that was otherwise more vaguely attributed to American greed. Yes, explicit efforts to favor jews, because they’re jews, remain as semitically correct as ever. It’s possible to see The Tribe circling their wagons around Epstein, as they did with Alfred Dreyfus and Leo Frank. It will happen if Epstein’s jewing ever becomes widely perceived as jewing. As things stand right now it’s easier to see Epstein treated more like Bernie Madoff, the free-wheeling mystery-man played up, the jewing played down.

130 thoughts on “The Epstein Effect”